Getting active on Chess.com during a difficult 2020

As many will know, the year 2020 has been plagued by the COVID-19 pandemic, which has meant that I have played very little over-the-board chess this year.  However, I have been increasingly actively involved on Chess.com, playing mainly fast games, but also some correspondence type games as well.  It has to be said, though, that even though we're allowed 3 to 7 days per move in those games, in practice I rarely spend much longer on an individual move than I would over the board.

I am a member of a group known as "The Unsound Openers", which seems to me to be very apt, especially as 10-15 years ago I quite often played the Englund Gambit with 1.d4 e5 2.dxe5 Nc6 3.Nf3 Qe7, including using it once in a serious game. 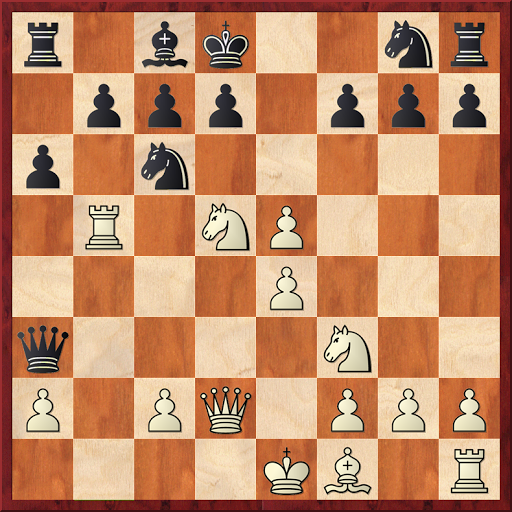 I examined this in some detail with Stefan Bucker back in the late 2000s, and we concluded that Black's defence is very difficult but that with best play Black might be able to hold, with White's poor pawn structure being the main source of hope for Black.  But Stockfish points out that 12.Rb3 Qxa2 13.Bc4! is very strong, with the idea of sacrificing the rook on h1 for an unstoppable attack after 13...Qa1+ 14.Ke2! (14.Qd1? Qxd1+ 15.Kxd1 leaves White with inadequate compensation for a pawn) 14...Qxh1 15.Qg5+ Nge7 16.Nxe7 Nxe7 17.Bxf7.  Black can play 13...Qa5 (or perhaps 12...Qa5 instead of 12...Qxa2) but White's attack appears to be close to winning in all lines.  The line 11.Ng5 Nh6 12.f4, suggested by Boris Avrukh, also appears to be close to winning.
Black's best bets appear to be 5...Qc5 (instead of 5...Qxb2, but this rather defeats the point of the opening) and 8...Bxd2+ 9.Qxd2 Kd8 (instead of 8...Ba5, or 8...Bxd2+ 9.Qxd2 Qxa2, whereupon 10.Rd1 is very strong) but they aren't much fun for Black either.  I had already given up on 3...Qe7 about 10 years ago, and on the rare occasions that I have used 1...e5 since, I have usually gone for 3...Nge7 instead, and these findings are unlikely to change that.
These days my openings tend not to be quite as unsound as that, but there are certainly a fair number that can be said to be at the margins of soundness, including the Blackmar-Diemer, the double pawn sacrifice in the Goring Gambit, the "Smerdon's Scandinavian" complex, the Albin Counter-Gambit and the Ruy Lopez Steinitz Defence Deferred piece sacrifice line 4...d6 5.0-0 Bg4 6.h3 h5.
I'm hoping that progress will pick up on updating my main chess website soon, as I've got to grips with the Chess.com game/analysis replayer (which you can also embed onto a website, at least if you have some sort of premium membership on there - I recently went for Gold, which is the least expensive) and I hope it might address the problem with the ChessBase replayer, which tends to have many levels of nested variations which can be hard to follow for some.  I note that Jonathan's blog 200 Open Games has been using the Chess.com replayer for a while.
Posted by Ian Simpson at 12:39 2 comments:

Fun with a chess variant

As I prepare for another revamp of my main chess site, here's a bit of light entertainment.

At Exeter Chess Club I was recently playing in a chess variants tournament.  One of my favourites is the variant where if the king reaches one of the central squares (e4, d4, e5, d5) it is an automatic win for the player whose king reaches that square.  Otherwise normal rules of chess apply.  I was playing Black and reached the following position with White to move: 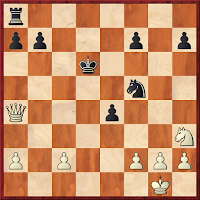 I had given up a queen for a rook in order to get my king out to d6.  In normal chess this position would be a straightforward win for White, but in this chess variant White has to be extremely careful as Black is only one move away from bringing the black king to the central squares and winning.

A question is whether White can save this position despite being a queen for a rook ahead - this is the sort of chess variant that wouldn't work with computer analysis.  An obvious try is 1.Qb5, covering the central squares for the time being, but after 1...Nd4 2,Qg5 f5 or 2.Qa5 b5, White is struggling to keep the central squares covered and stop the black king from advancing.  1.Qa5 is probably best, but White has to watch out for ...Rc8-c5 and ...Re8-e5 ideas.

The opening saw me on the black side of a Four Knights Game (via an unusual move order, 1.Nc3 Nc6 2.Nf3 e5 3.e4 Nf6 I think).  My opponent then played 4.Bc4, allowing 4...Nxe4.  He remarked afterwards that in this chess variant the Halloween Gambit (4.Nxe5, the subject of my Halloween update to my website) would have been strong as in various variations it is difficult for Black to stop White from safely moving the king forward towards the centre.

A "very nearly brilliancy" in the Morra

I had a "very nearly brilliancy" in the Morra a couple of days ago, where I played what was probably my best ever attack up to move 21, sacrificing a piece and then an exchange in order to get a winning attack, but then threw it all away at move 22.  I had actually planned 22.Bh6 in advance, but talked myself out of playing it, thinking that 22.Be7 was "safer" because the bishop was defended by the queen... 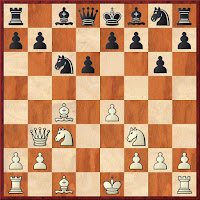 Hitting f7, and encouraging ...e6, whereupon Black's Dragon formation "loses its shape", as Marc Esserman puts it in his book. 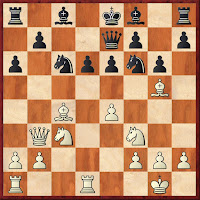 11. Bd5! was even stronger, but sacrificing the knight is the second best move in the position.

12... Bg7 13. dxc6 O-O is objectively best, but then White has attacking
chances and the better pawn structure in a position with level material, and
the black pawn on d6 will probably drop off.

14. f4! would have been even stronger, preventing Black's ...Ne4 idea, but a couple of lines have to be calculated accurately.  The move played in the game is also winning for White, though. 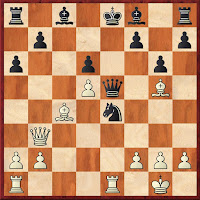 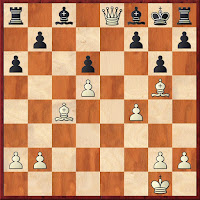 Unfortunately this is the point where I bottled it.  22.Bh6, which was my original intention, forces mate in four moves, but I somehow convinced myself that Black could wriggle out, and consequently played a "safer" move that allowed Black to wriggle out...

As is often the case after the psychological blow of missing a quick win, I rather went to
pieces. 23. Bh4 would still have left White with a strong, possibly winning,
attack.

Unfortunately I have been forced to link to the game rather than embed a replayable game into the blog post, because at least at my end I seem to have triggered some sort of block that is stopping me from viewing replayable chess games in my own blog (but not other people's blogs).

An agonising loss, but I do seem to have improved my attacking play a bit recently - a common past failing of mine has been to be too eager to "cash in" and missing the quiet moves (like 16.Qc3 and 18.f4 in the above game).  I think had I reached the position at move 15 this time last year I would probably have been preoccupied with trying to regain the piece with f2-f3 and it is unlikely that I would have had the guts to play 15.Rxe4.

Having seen a number of AlphaZero-Stockfish matches recently, I think I may well have been inspired by AlphaZero's willingness to sacrifice pawns and even pieces and then quietly improve its position.
Posted by Ian Simpson at 15:23 No comments:

I've just found out via Chessdom.com that Valeri Yandemirov passed away last year at the age of 55:
http://www.chessdom.com/in-memoriam-gm-valeri-yandemirov/ 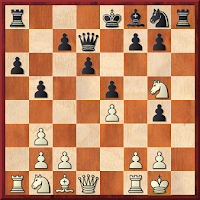 Black is currently a piece down but can generally regain the piece with ...f6 and ...fxg5 since the knight on g5 has no retreat square.  The main idea is however to play ...Qf7 and ...Qh5 and try to mate White down the h-file.  On the other hand this line is still theoretically dodgy because in the meantime White can smash Black on the queenside.  The line was dealt quite a heavy blow in the game Gashimov-Grischuk, Baku 2008: http://www.chessgames.com/perl/chessgame?gid=1492751

Nowadays, while 4...d6 has seen some popularity at the highest levels, GMs such as Shakhriyar Mamedyarov and Nigel Short have tended to prefer 5...Bd7 over 5...Bg4, but the 5...Bg4 line has still seen a few recent GM outings, particularly in the hands of Laurent Fressinet: http://www.chessgames.com/perl/chessgame?gid=1902468

Aseev-Yandemirov, Krasnoyarsk 2003 was arguably the greatest advert for his pet line:
http://www.chessgames.com/perl/chessgame?gid=1267372

I have tried these lines out myself from time to time since 2009 and currently have an online game that has reached the position after 6.h3 h5.  I tend to think that if it can work at GM level it must be good enough for mere mortals, even though it may be of marginal theoretical soundness.

I've probably mentioned the transposition from the Chigorin Defence before (it was also mentioned about a year and a half ago over at 200 Open Games).  Recently I managed to get it in one of my own online games, fittingly, in a Chess.com match between "The Gambit Players" and "Philippine C", and it actually started out as an Albin Counter-Gambit: 1.d4 d5 2.c4 e5, and White replied with the tame 3.e3.  After 3...Nc6 4.cxd5 Qxd5 we were into a Chigorin, and after 5.Nc3 Bb4 6.Nf3 exd4 7.exd4 we were into a Göring/Danish Gambit Declined.

In the meantime I finally had an outing in the line that I had corresponded with Gary Lane about over at Opening Lanes (Chesscafe.com):  1.e4 e5 2.d4 exd4 3.Nf3 Nc6 4.c3 d5 5.Bd3!? dxe4 6.Bxe4 Nf6 7.Bxc6+ bxc6 8.0-0 (which both of us suggested independently of each other).  I got some pressure in the IQP middlegame that ensued but did not make the most of it and ended up with a draw, but my opponent came close to losing on time.


Also I'm currently working on what will probably end up as a book-sized pdf article on the "open gambits" with an early d2-d4 (including the Italian and Max Lange gambits as well as the Danish, Göring, Scotch and Urusov) so that all the various transpositions will be handled in the one pdf file, and there will be links to replayable annotated examples in the text.  It's an ambitious project so it may well take me several months, but it would be satisfying to pull it off.
Posted by Ian Simpson at 16:37 2 comments: